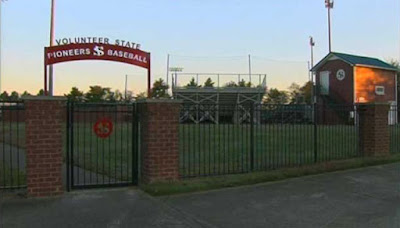 GALLATIN, TN -- The bellow of his laugh was so contagious, this gentle-hearted servant calling out into the crisp February air.

Following his introduction to less than 20 fans who braved this brisk winter day, Charles Thomas turned to me and said, "Kris, this is a great day for baseball."

Charles was the father of the coach, a team ranked in the top three in the nation for NJCAA baseball, fresh off a trip to the Junior College World Series. There we sat, a makeshift press box located on top of the first base dugout in Gallatin, TN. This field would be transformed later into the Tim Garrett Baseball Complex at Volunteer State College, and we spent part of the season sitting on the third base dugout at Vanderbilt's Hawkins Field (prior to remodel) while our lights were being installed. It was 1995-1996. Life was good.

And Charles was my right-hand man, or maybe I was his. Little did he know, he was my hero. He could speak like thunder, and then wrap a kindergartener around his little finger with the meekness of a Sunday School teacher. He never once spoke anything but a positive word to me, and reminded me that "one day kid, you're going to do big things."
My goal at that point was to marry the woman running the radio station and not commit an FCC violation while on the air. I accomplished both. I bet you did not know Jennifer was a D.J. - but that's a different story for a different time.

Charles' son (Kenny Thomas) was the head coach of the Pioneers until 1999 and later left Gallatin to become the head coach of the University of South Carolina at Aiken where he still leads the baseball program. I think his dad went with him. I never saw Mr. Thomas the elder again, though I have spoken to coach a couple of times.

I'll never forget the day he let me fill in. I did play-by-play over radio and public address announcing at the stadium at the same time while he attended a family event. He was my biggest fan. He was everybody's biggest fan. I asked him if one day I could take his job, and he said "Son, this isn't a job. This is what I do because I love it."
When he was not announcing live, he would take a radio mic and provide color commentary for me on 88.5 FM. Every minute or so, he would have to push the "other" button and talk to the fans live at the event. His voice was so smooth, we just let him echo over the radio and never talked over him.

Twenty years later, I am less that 500 feet from that same Vanderbilt baseball field where we called games on top of the dugout for half a season while Vol State used their field. After 18 years in full-time ministry, I was blessed this year to be named the public address announcer for the Vanderbilt Commodores basketball program.

I wish I knew if Mr. Thomas the elder was still alive.

Maybe he was God after all, and the Lord just decided to look like Charles Thomas and never tell us otherwise.

I love you all, and these are my thoughts.